The monograph "People and Fates. Szondiana in Psychological Counseling" was nominated for the title of the Best Book of Psychology in 2017 at the National "Golden Psyche" Competition:

The word "Fates" or "Destinies" didn't match to the mindset of the authors, so another name "Sagacity Practicum. Szondiana in Psychological Counseling" was chosen to present this original book on psychodiagnostics to the English speaking reader.

The title 'Sagacity Practicum' spellbinds. A vivid imagination immediately draws on a little brown bottle with an ornate label in the background of potion store and promises to the hero who dares to drink from it an exclusive wisdom.

However, this designation prefaces the book not about magic, but about marriage counseling, family psychotherapy, and kinship psychology and research.

Frankly, aforementioned list promptly carries the reader's associations into deep gloom. Who reads the books about the family relationship being happy together?!

I won't conceal the discouraging truth - it's manual on family psychology destined to smart people. The reader of 'Sagacity Practicum' must possess the brains and open-mindedness. Say 'Goodbye' to your usual ideas and well-learned stereotypes about the family life. New psychodiagnostic frames once embodied into the mind cannot be canceled.

Now you are getting warned. Let's take a closer look at the eight levels of psychodiagnostics and get acquainted with the art of making a personality evaluation.

Nowadays the field of evaluation is conventionally recognized as a science concerned with the use of tests and investigation of psychological factors underlying human behavior. And what about the art of keen eye and shrewdness?

Here they are! Fairy tales, anecdote cases, and movies give us some types of characters: clever heroes, savvy detectives, and insightful doctors. Their inherent practical sagacity and pragmatic anticipation already staked out domains in the public mind. Psychologists more likely appear wherein like a figure from a caricature scene about rigid 'patient-sitter' near the coach. It sounds bad, but the mass culture has a lot of doubt in psychologists' judgment. It's time to bring to light something new and dispel the common misconception.

Mental health professionals have accumulated a vast experience in comprehending of partnership and do have useful nonverbal tools for prognosis and assessment. Why do we know nothing about their widespread implementation? 'No research – no approval'. It may be named America's default EBPPiness and means the updated requirements of evidence-based psychological practice.

A bad workman always blames his tools, while a silly psychologist always complains about his setting. However, the home truth about modern psychology as an academic science is not in double-blind randomized controlled trials in the field which are unavailable so far.

Actually, we don't have either the mindset to understand what is happening in partnership nor concepts to describe its complexity, despite the facts that different kinds of the partnership are accompanying us throughout life and Western society has accumulated the extensive experience in psychological problems treatment.

Eight levels of psychodiagnostics provide both a mindset and a conceptual framework. In daily routine, the usage of new skills will broaden your horizons and will change your understanding of co-workers, friends and family members. Due to the purchased sagacity, you may discover courage and wisdom to improve your personal ties. And what is much more important, its application will turn you into professional equipped with incredible predictive power in a counseling operation.
Below you will find a digest of an amazing book written by two professional psychotherapists, Olga Bermant-Polyakova Ph.D. and Ilona Romanova Ph.D. The original text is entitled "People and Fates. Szondiana in Psychological Counseling".

A ponderous volume in Russian, introducing a comprehensive system named non-classical szondiana, presents the well-edited transcript of the workshop for mental health professionals held in Ekaterinburg in April 2016. It contains three sections which are devoted to training in observation, sagacity and family counseling.

Honestly, the book is huge. The first section includes 17 chapters, the second contains 9 chapters and the third counts 14 chapters for a total of 40 chapters. Each section ends with ten control questions and a quiz. The cited bibliography has 190 references. Throughout the text, the authors put 120 exercises.

The vast theoretical material is explained by four Appendixes. The first appendix contains 13 texts with biographical material. The second appendix cites numerous examples from the transcript and is divided into 4 verbatim. The third appendix provides 4 neuropsychological articles. The fourth appendix describes the mores and the practices and includes 17 texts.
The extensive clinical material is illustrated by 25 voluminous cases about children, spouse, and child-parent relationship and brings out a never-ending psychological interplay of three generation into one kinship.

Massive social-cultural material concerning sociological and historical issues from the psychodiagnostic point of view is marshaled in 70 biographies of famous Russian people from XVIII up to XXI century (the only exception for foreign citizens was made for American businessman Isaak Singer, the inventor of the sewing machine because handmade sewing is menta-fact for Russian mentality). The names index contains references to 465 historical and political figures.

However, the 700 pages of the monograph are notable not only because of the authors' astonishing ability to process tons of human sciences information. It perfectly fits the 'provocative thinking' book genre.

It seems sacrilegious to say this, but 'The Story of Steve J. Revisited', where szondiana was applied to the psychological interpretation of the world famous business icon Steve Jobs, is overtaking the monograph in the run to the edge. It's becoming very clear that publishing a re-written story about Jobs's family manifests provocative thinking about a provocative subject in provocative social-political circumstances.

To summarize, a 2017th brought up a new fascinating approach in psychodiagnostics. The 'People and Fates. Szondiana in Psychological Counseling' is an interesting and exciting book in Russian whose pages capture your attention immediately, turn your mind in a few weeks and leave an aftertaste for months.

May be one day you will read it wholly, but right now you are holding in your hands the digest of the book which includes three different pieces: one paragraph from the monography providing a part of the workshop verbatim named 'Sagacity with children's toys' translated into English; the synopsis of theoretical framework presented in the main 40 chapters named 'Eight levels of psychodiagnostics', especially written for this edition, with references to modern Western researches in the field; and the complete table of contents interlineally translated from Russian edition. Treat 'Sagacity Practicum. Szondiana in Psychological Counseling' as a long read for one evening.

Table of contents
You have read a digest of an amazing book written by two professional psychotherapists, Olga Bermant-Polyakova Ph.D. and Ilona Romanova Ph.D. The original text is entitled "People and Fates. Szondiana in Psychological Counseling".

A ponderous volume in Russian, introducing a comprehensive system named non-classical szondiana, was published in Ekaterinburg, Russian Federation, on February 2017.

The original edition in Russian is available

Below is the table of contents translated into English: 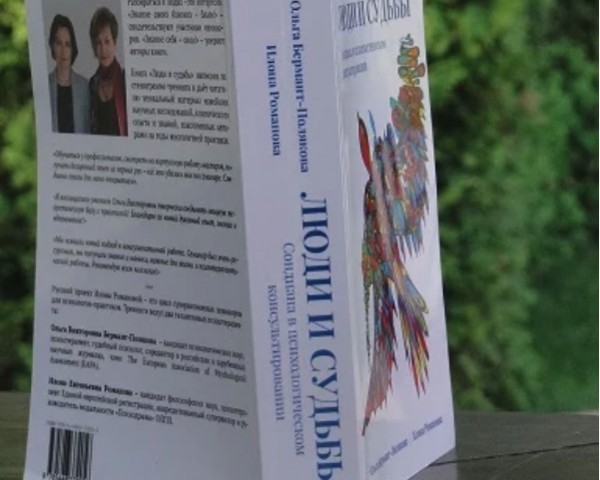 Practicum on materials of Section 1
Ten questions for self-check. – Quiz 'At the dacha'.

Section 2. Sagacity Training
Chapter 2.1. The standard case
The next day morning. – Group dynamics according to Bion. – The standard case. – The standard case analysis. – The point of intervention.
Chapter 2.2. Therapeutic metaphors
Therapeutic target. – Therapeutic tactic. – Getting started. – The case about the lack of tenderness in the husband. – The case about the soft lover. – Therapeutic metaphors and non-classical szondiana.
Chapter 2.3. Discussions about styles of attachment
A variety of norm's representations. – About mentalization. – The case about sticky mother. - Discussions about styles of attachment. – Attachment theory and non-classical szondiana.
Chapter 2.4. The fate of the adventurous men
Another look at the family. – Few words about the spousal life. – Worldview from the graveyard. - The fate of the adventurous men. – Mnemonics.
Chapter 2.5. Family heritage
The lawyer's wit. – The fate of the men of principles. – The fate of the highly skilled men.
Chapter 2.6. Finding the right place in the sun
The Ural land. – The dragoman and the chief. – The fate of the generous soul. - Table 3. The distribution of different family structures among Russian online volunteers, 2016. – The fate supports a wishful and drags an unwilling one. – People and fates.
Chapter 2.7. Sagacity practicum
Metallic cupholder for trains' passengers. – Singer's sewing machine. – The first cosmonaut in the world. – The Millennium of Ancient Russ christening. – The togetherness of the souls.
Chapter 2.8. Circular genogram
Family structure. – The example of the circular genogram. – Rule of genotropism (kins attraction). – The types of difficulties. – Too intimate. - The choice between art and career. – Leningrad's research school. - The stimulus model of the situation. - The struggle with the evil forces tempting a family member. - The accumulation of positive qualities.
Chapter 2.9. Family myths
Milan's research school. – We are unanimous family. – We are rescue workers. – We are heroes. – We are successful people. – We are human beings. – Systemic family therapy and non-classical szondiana.

Practicum on materials of Section 2
Ten questions for self-check. – Quiz 'At the wedding'.

Section 3. Training on Family Counseling
Chapter 3.1. Intrapersonal difficulties: deficit
The last day morning. – The son of two writers. – Nephew (case). – Their cross to bear (case).
Chapter 3.2. Intrapersonal difficulties: unclaimed
A bishop-surgeon. – How not to become a rock-star (case). – Used up (case).
Chapter 3.3. Intrapersonal difficulties: one's façade
Without kinsfolk. – The rich case. – The rich case analysis. – The line of child-parent relationship. – The line of the family system. – The line of Unhappen. - What other lines can be found in the rich case? – The point of worldview.
Chapter 3.4. Szondiana and psychologists
What may non-classical szondiana contribute to the psychological practice? – The role of diagnosis in counseling. – One more example on tempo-rhythm. – One more example of fate. – One more example of self-realization domain (system, milieu, family, street).
Chapter 3.5. Theoretical speculations
Non-classical szondiana and business counseling according to Rozin. – Group dynamics according to Beck and Cowan. – Non-classical szondiana and theories of intelligence. – Table 4. Stages of cognitive development according to Jean Piaget and non-classical szondiana. – Picture 8. Modalities of multiple intelligence according to Howard Gardner and non-classical szondiana. – Non-classical szondiana and theories of motivation. – Abraham Maslow's hierarchy of needs. – Picture 9. Non-classical szondiana needs mapped inside the pyramid. - Typological model of motivation according to Vladimir Gerchikov. – When loneliness is unbearable.
Chapter 3.6. To summarize
Subsystem, system, above-system. – The family of People? – About 'system-vector psychology'. – The gelded szondiana.
Chapter 3.7. About nerds
When society's hierarchical games are uninteresting. – Interpersonal difficulties. – When maintaining of relationship is not interesting. – When people's world doesn't matter.
Chapter 3.8. Mutual projective identification
Coffee-break. – Psychological defenses and mindful choice. – Projective identification. – Mutual projective identification. – The case about the fourth attempt to divorce.
Chapter 3.9. Interpersonal trauma
When desire is completely off-putting. – The case about divorce burnout. – The case about parent's re-marriage. – Interpersonal trauma. – Why do needs become switched off (powerless)? – The aspiring case. – The aspiring case analysis.
Chapter 3.10. 'The family of sub-personalities' technique
Love triangle. – 'The family of sub-personalities' technique. – Conducting the inquiry. - Where is the money? (case). – Where are the grandparents? (case). – Where is kinship? (case).
Chapter 3.11. Divorce
The feeling of being affiliated. – Children after parents' divorce. – When is your feeling of togetherness particularly strong? – Experiencing the family togetherness. – Conflicting affiliations. – Conflicting loyalties. – The conflict of affiliation and loyalty. – Emotional detachment within the family.
Chapter 3.12. Eight levels of psychodiagnostics
Psychodiagnostic ideas, apprehended by discerning. Levels 1 – 4. – Psychodiagnostic ideas, apprehended by reasoning. Levels 5 – 8. – The fate and the freedom. – Psychological counseling for families: intrapersonal, interpersonal, intergroup difficulties. – The nice case.
Chapter 3.13. Interpersonal difficulties: my family and me
You have to choose a serious profession. – To be a psychologist (case). – The affair (case). – To overcome the emptiness and start over. – To renounce and forget.
Chapter 3.14. Intergroup disagreements
The soldier created an automatic weapon. – Few literature pieces.

Practicum on materials of Section 3
Ten questions for self-check. – Quiz 'At the faculty '.

Conclusion
Feedback from the training participants. –Gratitude addressed to the trainers. – Authors' gratitude.